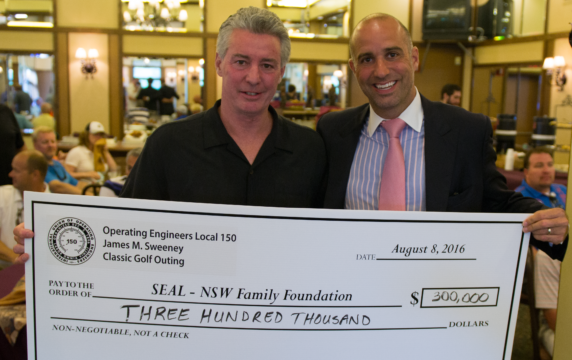 On August 8, International Union of Operating Engineers Local 150 president-business manager James M. Sweeney presented a check for $300,000 to the Navy SEAL-Naval Special Warfare Family Foundation at Local 150’s charity golf fundraiser, the James M. Sweeney Classic. The event drew more than 500 golfers to four golf courses in Lemont, and the check was presented to Craig Cassel, secretary of the Foundation.

“Both as Americans, and as an industry, supporting the needs of our military families is deeply personal,” said IUOE Local 150 President James Sweeney.  “Veterans who are coming home from Iraq and Afghanistan are increasingly turning to the construction trades for civilian employment, and the industry is welcoming them with open arms.  Their sacrifice and battle-tested skills warrant not just the dignity of a viable middle class civilian career pathway, but a steadfast commitment to the support services that their families have earned and deserve. It was an honor to be able to join with so many in our industry to support these families who have given our country so much.”

“We are honored to be the recipients of the generosity of Local 150’s Sweeney Golf Classic.  It is precisely this level of local patriotic support and giving that enables the SEAL-NSW Family Foundation to design and run the right programs for the Navy SEAL families,” said retired Navy Captain William R. Fenick, the Executive Director of the Foundation.

The event brought together a cross section of workers, business leaders, elected officials and military families.